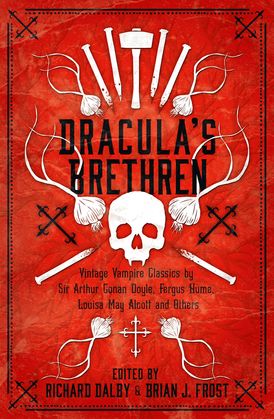 Neglected vampire classics - including tales by Sir Arthur Conan Doyle, Louisa May Alcott and others. Selected by Richard Dalby and introduced by Brian J. Frost.

In 1897, Bram Stoker’s iconic DRACULA redefined the horror genre and had a significant impact on the image of the vampire in popular culture. But encounters with the undead were nothing new: they had electrified readers of Gothic fiction since even before Victorian times.

DRACULA’S BRETHREN is a tribute to those early writers, a collation of 19 archetypal tales written between 1820 and 1910, many long forgotten, celebrating the vampire stories that both inspired and were inspired by Bram Stoker’s iconic novel.

A companion to Richard Dalby’s definitive anthology, DRACULA’S BROOD, itself 30 years old, these rediscovered stories are a genuine treasure trove for classic thrill-seekers and all lovers of supernatural fiction.

Brian J. Frost is widely regarded as one of the world’s leading authorities on vintage weird fiction. He first became interested in vampires after reading Bram Stoker’s Dracula while in his teens, and in 1989 published the first full-scale survey of vampire fiction, The Monster with a Thousand Faces: Guises of the Vampires in Myth and Literature. A talented artist, Brian specialises in fantasy and macabre illustrations, one of which appears as the frontispiece of this volume.

Other Works by Richard Dalby