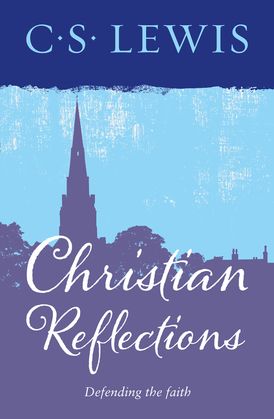 A collection of Lewis’s essays against ‘the new morality’ – a fine collection representing Lewis at his most brilliant.

Published shortly after his death, aiming to make available some of his writings which were not at that time publicly accessible, and to counter the prevailing new morality of the sixties, ‘Christian Reflections’ gives a robust defence of the Christian Gospel.

Now, fifty years later, when Christian communities are, in our own day, struggling to come to terms with a shifting morality, this little volume will be a comforting reminder of the never-changing truths of the faith.

As ever, Lewis’s clear and eloquent mind gives plenty of food for thought, especially as he aims his intellectual ammunition at the modern myths still so prevalent in our post-modern culture.