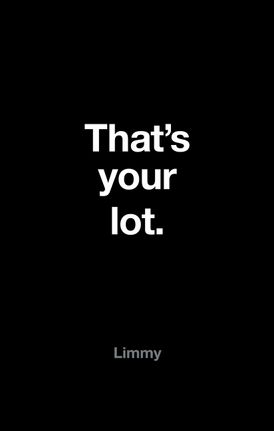 This is Limmy’s second book.

Tom is in a soft play with his daughters. He’s bored. He’s so bored he can move things with his mind.

A man fills up a mate’s biscuit tin without ever telling him, to see what happens.

Maggie’s boyfriend Iain bought a curtain. It keeps attacking them. She wants it out the house.

A man is sitting in his wheelie bin at two in the morning, and he wants to tell you why.

Kenny’s mate Scott is suicidal and ridden with guilt. Kenny takes him on holiday to Benidorm. It’ll be some laugh.

‘The comedy book of the year.’ - Time Out

‘Didn't realise pieces of paper with no pictures on could be so funny. I mean I was cryin’ all day yesterday into this book. Hilarious’ - Someone on Amazon

Brian ‘Limmy’ Limond is a Scottish comedian who first became known for his website and blog, and is now regarded as one of Scotland's most original comedy talents. In 2006 Limmy started a hilarious daily podcast, Limmy's World of Glasgow, and in 2010 he launched his incredibly successful comedy series Limmy’s Show. His first book, Daft Wee Stories, was a Sunday Times bestseller.

Other Works by Limmy