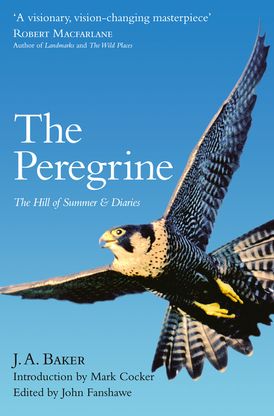 Despite the association of peregrines with the wild, outer reaches of the British Isles, The Peregrine is set on the flat marshes of the Essex coast, where J A Baker spent a long winter looking and writing about the visitors from the uplands – peregrines that spend the winter hunting the huge flocks of pigeons and waders that share the desolate landscape with them.

Including original diaries from which The Peregrine was written and its companion volume The Hill of Summer, this is a beautiful compendium of lyrical nature writing at its absolute best. Such luminaries as Richard Mabey, Robert Macfarlane, Ted Hughes and Andrew Motion have cited this as one of the most important books in 20th Century nature writing, and the bestselling author Mark Cocker has provided an introduction on the importance of Baker, his writings and the diaries – creating the essential volume of Baker's writings.

Papers, maps, and letters have recently come to light which in turn provide a little more background into J A Baker’s history. Contemporaries – particularly from his time at school in Chelmsford – have provided insights, remembering a school friend who clearly made an impact on his generation.

Among fragments of letters to Baker was one from a reader who praised a piece that Baker had written in RSPB Birds magazine in 1971. Apart from a paper on peregrines which Baker wrote for the Essex Bird Report, this article – entitled On the Essex Coast – appears to be his only other published piece of writing, and, with the agreement of the RSPB, it has been included in this updated new paperback edition of Baker’s astounding work.

Other Works by J. A. Baker