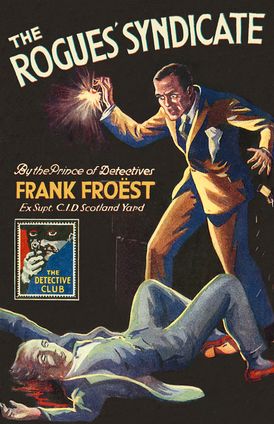 This exciting thriller by the late Frank Froest, himself a detective of international fame, will satisfy the most exacting of detective story connoisseurs. Against a familiar London background we have here a tale of breath-taking adventure – knifing, arson, racing-taxicabs, and shooting-to-kill.

Lost in a London fog, young Jimmie Hallett is accosted by a frightened woman who hands him a package and flees. Within hours, he is being questioned about the murder of the girl’s father and a dangerous international conspiracy. Can genial detective Weir Menzies, even with all the resources of Scotland Yard behind him, succeed in outwitting a faceless gang of organised thieves and killers?

Frank Froëst, the highly decorated Superintendent of Scotland Yard’s C.I.D., began his retirement from the Metropolitan Police by writing The Grell Mystery, acclaimed as the first crime novel to incorporate authentic police procedures. With George Dilnot, co-author of the story collection The Crime Club, Froëst wrote one more novel, the ambitious and thrilling The Rogues’ Syndicate, published in 1916 and also released as a silent movie, Millionaire Hallet’s Adventure. The book was republished in April 1930 by the Detective Story Club, but was inadvertently sourced from an abridged, Americanised version called The Maelstrom.

(This book is COMPLETE AND UNABRIDGED, despite what some retailers have put in their listings.)

Frank Castle Froëst was born in the West of England around 1858. He joined the Metropolitan Police as a police constable in 1879 and worked his way up to Inspector at Scotland Yard by 1894, Chief Inspector in 1903 and Superintendent of the Criminal Investigation Department (CID) from 1906 to his retirement in 1912. Working with the journalist George Dilnot, he wrote The Grell Mystery (1913), the story collection The Crime Club (1915) and The Rogues’ Syndicate (1916). After his wife died in 1916, Frank moved into politics and was elected to Somerset County Council. He died in 1930.

Other Works by Frank Froest