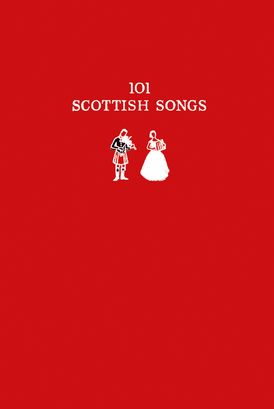 A small format gift book which is a reproduction of the popular book ‘101 Scottish Songs’ published by Collins in 1962. Popularized as ‘the wee red songbook’ in Scottish folk circles, this publication was in print for 26 years.

One of the most influential books of folk songs ever, compiled by Norman Buchan, and the book which provided a foundation repertoire to many a young singer in the 60s. These songs were a collection of the most significant and influential traditional Scottish folk songs in 1962 and many are still widely sung today.

This comprehensive collection also contains a number of lesser known songs such as ‘The Rovin’ Ploughboy’, ‘Macpherson’s Rant’, ‘The Bressay Lullaby’ and ‘Get Up and Bar the Door’.

This unique collection from children’s to bothy songs and traditional to love songs celebrates Scottish traditional music at its best.

This publication is launched as part of the 50th anniversary of The Traditional Music & Song Association of Scotland. Links to listen to these songs will be available via their website www.tmsa.org.uk

Norman was originally a teacher in Rutherglen before becoming a Labour MP and was also known as the compiler of the bestselling book 101 Scottish Songs.

Peter, another teacher, was a weel-kent singer in Aberdeen with the group The Gaugers and also a respected folk song collector.

Other Works by Collins Books

Scotland The Best 100 Places: Extraordinary places and where best to walk, eat and sleep