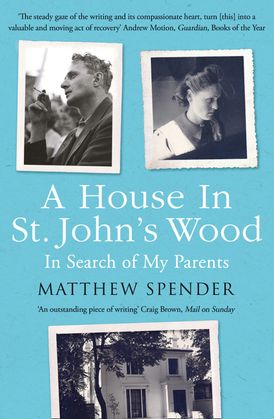 An intimate portrait of Stephen Spender’s extraordinary life written by Matthew Spender, shifting between memoir and biography, with new insights drawn from personal recollections and his father’s copious unpublished archives.

Stephen Spender's life is a vivid snapshot of the twentieth century. Making friends with Auden and Isherwood while at Oxford, together they enjoyed adventures in Europe, becoming early opponents of the rise of fascism. Whilst pioneering modern poetry, Stephen later produced propaganda for the war effort – establishing an enduring reputation for mysterious activity. Despite marrying Natasha Litvin, an ambitious young concert pianist, Stephen was often entangled with young men and never able to reveal his secrets, leaving her to introspective questions, as the artistic world of London circled them. In this elegant memoir, his son Matthew offers an intimate portrait of a father, a marriage and an extraordinary life.

Matthew Spender is a British painter and sculptor who has worked for most of his life in Italy. He is the author of two books: ‘Within Tuscany: Reflections on a Time and Place’, and ‘From a High Place: a Life of Arshile Gorky’; and the editor of: ‘Il diario di Sintra’, based on a diary written by Stephen Spender and Christopher Isherwood in Portugal in 1936; ‘Goats on the Roof’, a collection of documents and correspondence about the life of Arshile Gorky; and the forthcoming Francis Bacon, an introduction to Bacon’s ideas on art.

Other Works by Matthew Spender

Coming in to Land

We British: The Poetry of a People

How to Be Alone