Black Gold: The History of How Coal Made Britain 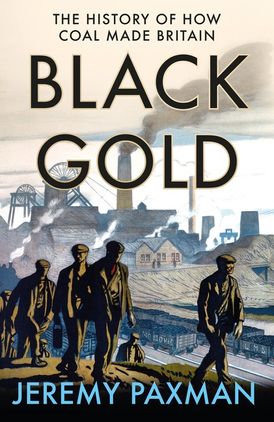 Black Gold: The History of How Coal Made Britain

Where would Britain be without coal? In brilliant social history, Jeremy Paxman tells the story of how the black stuff has shaped every aspect of Britain.

Coal is the commodity that made Britain. Dirty and polluting though it is, this black rock acted as a midwife to genius. It drove industry, religion, politics, empire, trade. It powered the industrial revolution, turned Britain into the first urban nation and is the industry that made almost all others possible.

In this brilliant social history, bestselling author and broadcaster Jeremy Paxman tells the story of coal mining in England, Scotland and Wales from Roman times, through the birth of steam power to war, nationalisation, pea-souper smogs, industrial strife and the picket lines of the Miner’s Strike.

Written in the captivating style of his bestselling book The English, Paxman ranges widely across Britain to explore stories of engineers and inventors, entrepreneurs and industrialists, and the aristocrats such as the Marquises of Bute whose wealth ballooned after the discovery of coal seams beneath their blessed acres.

But whilst the rich inevitably became richer, the story told by Black Gold is first and foremost a history of the working miners – the men, women and often children who toiled in appalling conditions down in the mines; the villages that were thrown up around the pit-head; the brass bands, nonconformist religion and passionate horticulture that flourished in mining communities. And the development of trade unionism and the Labour movement as tight bonds of comradeship were formed underground. ‘The two greatest industrial strikes of the 20th century – both detailed here – were both about coal.

Down the mineshafts, conditions were appalling with little or no time spent on safety. Multiple and tragically frequent pit tragedies including Aberfan are catalogued here. As Engels put it: ‘there is no occupation in which a man may meet his end in so many diverse ways as this one’.

Almost all traces of coal-mining have vanished from Britain but with this brilliant history, Black Gold demonstrates just how much we owe to the black stuff.

Jeremy Paxman was born in 1950 and studied English Literature at Cambridge. Unable to get another job, he became a BBC reporter and then a studio presenter. Over a quarter-century on Newsnight, he revolutionised the cosy relationship between interviewer and politician and, more than any other interviewer, took the side of the viewer against the guest. He is also quizmaster on University Challenge, has written and presented television series such as <i>Empire</i>, <i>The Victorians</i>, <i>Great Britain’s Great War</i>, and is the author of numerous articles for many publications . He has also written many books including the best-selling <i>The English</i>, <i>On Royalty</i> and <i>Friends in High Places</i>. In his spare time, he enjoys fly-fishing.

Other Works by Jeremy Paxman