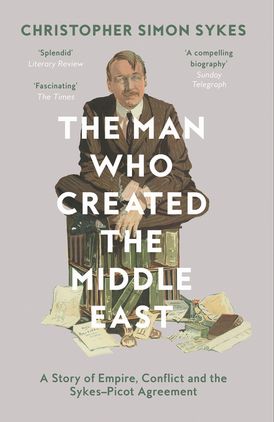 At the age of only 36, Sir Mark Sykes was signatory to the Sykes-Picot agreement, one of the most reviled treaties of modern times. A century later, Christopher Sykes’ lively biography of his grandfather reassesses his life and work, and the political instability and violence in the Middle East attributed to it.

The Sykes–Picot agreement was drawn by the eponymous
British and French diplomats in 1916 to determine the divide
of the collapsing empire in the event of an allied victory in
World War I. Excluding Arab involvement, it negated their
earlier guarantee of independence made by the British –
and controversy has raged around it ever since.
But who was Mark Sykes?

A century on, Christopher Simon Sykes reveals new facets
of a misremembered diplomatic giant. Using previously
undisclosed family letters and cartoons by his grandfather,
he delivers a comprehensive and humbling account of the man behind one of the most impactful policies in the Middle East.

Christopher Simon Sykes grew up at Sledmere, and went on to become a journalist, photographer and writer. His work has appeared in ‘Vogue’, ‘House & Garden’, the ‘Sunday Telegraph’ magazine and ‘Architectural Digest’ amongst others, and he wrote and presented ‘Upper Crust’, a six-part series on country house cookery for BBC Two. He has written six and photographed fourteen books, including ‘The National Trust Country House Album’, ‘The Rolling Stones on Tour’ and ‘The Garden at Buckingham Palace’. Christopher Simon Sykes is married with two children and lives in North London.

Other Works by Christopher Simon Sykes