Television: A History in 100 Programmes 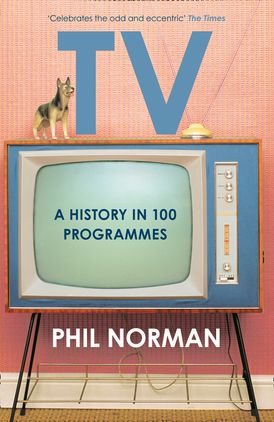 Television: A History in 100 Programmes

For decades, television occupied a unique position in the national imagination. By today’s standards the ‘box’ was tiny, but it dominated the living room in a way its technically superior descendants never quite manage. Has the television lost its power in the internet age? Cultural historian Phil Norman goes in search of such questions as he tells the history of TV through 100 ground-breaking programmes.

He celebrates the joy of the TV schedule which, in the days of just a few channels, threw up dizzy juxtapositions on a daily basis: an earnest play might be followed by a variety spectacular; a horror anthology that drove children behind furniture followed a sketch show that chewed the carpet. This riotous mix, now slowly disappearing as themed channels and on-demand services take over, gave television a sense of community that no other media could compete with.

The wonderful variety of programmes in the book includes overlooked gems and justly wiped follies, overcooked spectaculars and underfunded experiments – just as much a part of TV history as the national treasures and stone-cold classics. A History of Television in 100 Programmes revels in the days when television was at the most exciting, creative stage of any medium: a cottage industry with the world at its feet.

Other Works by Phil Norman

A History of Television in 100 Programmes