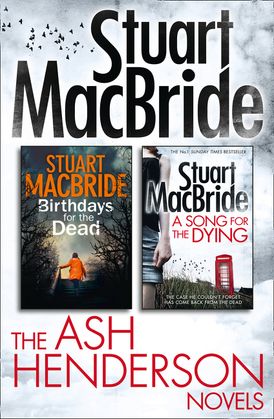 BIRTHDAYS FOR THE DEAD: Detective Constable Ash Henderson has a dark secret…

Five years ago his daughter, Rebecca, went missing on the eve of her thirteenth birthday. A year later the first card arrived: home-made, with a Polaroid picture stuck to the front – Rebecca, strapped to a chair, gagged and terrified. Every year another card: each one worse than the last.

The tabloids call him ‘The Birthday Boy’. He’s been snatching girls for twelve years, always in the run-up to their thirteenth birthday, sending the families his home-made cards showing their daughters being slowly tortured to death.

But Ash hasn’t told anyone about Rebecca’s birthday cards – they all think she’s just run away from home – because if anyone finds out, he’ll be taken off the investigation. And he’s sacrificed too much to give up before his daughter’s killer gets what he deserves…

A SONG FOR THE DYING: He’s back…

Eight years ago, ‘The Inside Man’ murdered four women and left three more in critical condition – all of them with their stomachs slit open and a plastic doll stitched inside.

And then the killer just … disappeared.

Ash Henderson was a Detective Inspector on the initial investigation, but a lot can change in eight years. His family has been destroyed, his career is in tatters, and one of Oldcastle’s most vicious criminals is making sure he spends the rest of his life in prison.

Now a nurse has turned up dead on a patch of waste ground, a plastic doll buried beneath her skin, and it looks as if Ash might finally get a shot at redemption. At earning his freedom.

Praise for BIRTHDAYS FOR THE DEAD:

Praise for A SONG FOR THE DYING:

‘A powerful, swift-moving narrative … required reading for those who enjoy crime fiction with a bitter taste.’ Andrew Taylor, Spectator

‘Frightening stuff … a cast of characters to die for’ Sun

‘Darkly gripping … as smart a piece of crime fiction as you’re likely to read this year … or next.’ Sunday Sport

Stuart MacBride is the No.1 bestselling author of the DS Logan McRae series. His novels have won him the CWA Dagger in the Library, the Barry Award for Best Debut Novel, and Best Breakthrough Author at the ITV3 crime thriller awards. Stuart’s other works include Halfhead, a near-future thriller, Sawbones, a novella aimed at adult emergent readers, and several short stories. He lives in the north-east of Scotland with his wife, Fiona, and cat, Grendel.

The Missing and the Dead (Logan McRae, Book 9)