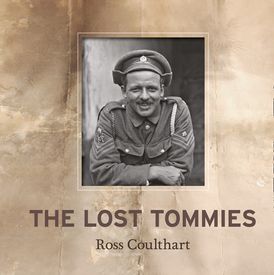 ‘Lost Tommies’ brings together stunning never-before-seen images of Western Front tommies and their amazing stories in a beautiful collection that is part thriller, part family history and part national archive.

For much of the First World War, the small French village of Vignacourt was always behind the front lines – as a staging point, casualty clearing station and recreation area for troops of all nationalities moving up to and then back from the battlefields on the Somme. Here, one enterprising photographer took the opportunity of offering portrait photographs. A century later, his stunning images were discovered, abandoned, in a farm house.

Captured on glass, printed into postcards and posted home, the photographs enabled soldiers to maintain a fragile link with loved ones at home. In ‘Lost Tommies’, this collection covers many of the significant aspects of British involvement on the Western Front, from military life to the friendships and bonds formed between the soldiers and civilians. With servicemen from around the world these faces are gathered together for what would become the front line of the Battle of the Somme. Beautifully reproduced, it is a unique collection and a magnificent memorial.