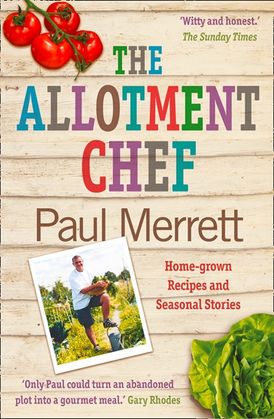 Michelin-starred chef and star of BBC 2’s Economy Gastronomy Paul Merrett is using the plot…This is the story of how one man swaps his shopping trolley for a wheelbarrow and cooks up fine, homely food as a result.

This is the story of how a famous foodie turns to a small plot of communal land to feed his family. Having become tired of poor-quality supermarket food and disillusioned with the dubious ethics of large corporations, Paul Merrett takes an allotment to see if he and his family can live off the fruit and vegetables they are able to grow. Along the way Paul reconnects with his grandparents' legacy of self-sufficiency and discovers the unbeatable flavour of a home-grown green tomato (especially when it's turned into salsa with spring onion and mint). He also learns that our romantic notions of a simpler life are not as simple as they seem…

The Allotment Chef follows Paul, his wife and two reluctant children as they learn to garden, make what they hope is their final trip to the supermarket, build relationships with fellow allotmenteers and slowly watch their crops flourish and sometimes fail. They contend with the inevitable disappointments along the way with good humour and perseverance, and only the occasional temper tantrum.

As the asparagus poke through the soil and the battle against the lettuce-munching slugs is won, Paul turns his humble vegetables into recipes worthy of his epicurean background. He includes over 85 allotment-inspired recipes, including simple dishes such as One Pot Vegetable Stew and Meringue Cake with Summer Berries as well as more involved dishes such as Pumpkin Ravioli, Tea-Smoked Chicken Breast on Allotment Vegetables and Steamed Walnut and Allspice Sponge with Roasted Plums.

Paul’s charming narrative is interspersed with his personal take on food ethics, celebrity chefs and the legacy of his self-sufficient grandparents. Reportage and food photography accompanies his story. Part recipe book, part memoir, The Allotment Chef is an engaging, informative and humorous read.

Paul Merrett began his career under the tutelage of Gary Rhodes before going on to work in some of London's best restaurants. He has earned two Michelin stars, one at Interlude and one at The Greenhouse. He opened the highly popular restaurant The Farm in 2004 and left to focus on his writing career.
Paul is the presenter of BBC 2's Ever Wondered about Food. He also co-presented the prime-time series The Best and co-authored the bestselling book which accompanied the series. He lives in London with his wife, two children and an allotment.

Other Works by Paul Merrett