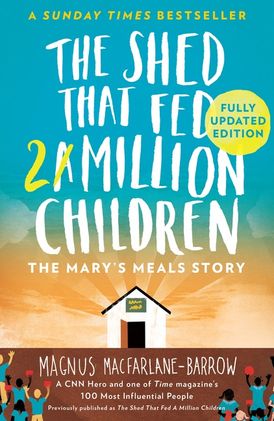 Mary’s Meals is born from acts of love. If you put all those many acts of sacrifice together it creates a beautiful thing.

Mary’s Meals tells the inspirational and compelling story of how a cripplingly shy fish farmer from Argyll, Scotland, became the international CEO of a global charity that now feeds over 800,000 children a day.

In 1992, Magnus MacFarlane-Barrow was enjoying a pint with his brother when he got an idea that would change his life – and radically change the lives of others. After watching a news bulletin about war-torn Bosnia, the two brothers agreed to take a week’s hiatus from work to help.

What neither of them expected is that what began as a one-time road trip in a beaten-up Landrover rapidly grew to become Magnus’s life’s work – leading him to leave his job, sell his house and direct all his efforts to feeding thousands of the world’s poorest children.

Magnus retells how a series of miraculous circumstances and an overwhelming display of love from those around him led to the creation of Mary’s Meals; an organisation that now holds the key to eradicating child hunger altogether. This humble, heart-warming yet powerful story has never been more relevant in our society of plenty and privilege. It will open your eyes to the extraordinary impact that one person can make.

Magnus started his career as a Salmon farmer in rural Argyll, but when the Balkan conflict began, he and his brother were so moved by the scenes on television that they gathered a jeep-load of aid and joined a convoy travelling to Bosnia to distribute it. On his return home, Magnus expected to resume his job, however, he came back to discover that the public had carried on donating and instead he continued organising and distributing aid. In 2002 his work led him to Malawi, where he met a family whose situation would alter the course of his work, and Mary’s Meals was born.

Other Works by Magnus MacFarlane-Barrow

The Shed That Fed a Million Children: The Extraordinary Story of Mary’s Meals

Memoirs of a Jewish Extremist

Theirs Is the Kingdom

Philanthropy Revolution: How to Inspire Donors, Build Relationships and Make a Difference