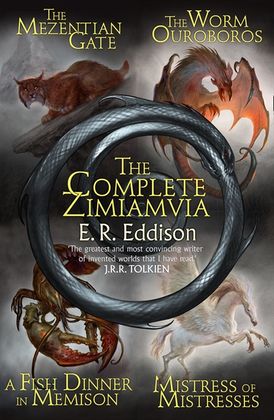 The classic epic trilogy of parallel worlds, admired by Tolkien and the great prototype for The Lord of the Rings and modern fantasy fiction. Also includes The Worm Ouroboros.

When Tolkien’s The Lord of the Rings was published, reviewers saw that there was only one author with whom he could legitimately be compared: Eric Rucker Eddison (1882-1945). He met both Tolkien and Lewis, and was cited by both as the game-changer in fantastic literature and a key influence on them. His two principal works – the sprawling and opulent fantasy trilogy Zimiamvia (which has been favourably compared to Mervyn Peake’s Gormenghast) and the earlier hedonistic The Worm Ouroboros (a cross between H.P. Lovecraft and Lord Dunsany) – put Eddison up among the masters of his craft. Admirers including Ursula Le Guin, Robert Silverberg and Clive Barker have all lined up to praise his books.

This complete eBook edition includes the three books of the Zimiamvia Trilogy - Mistress of Mistresses, A Fish Dinner in Memison, and The Mezentian Gate, together with the epic prelude novel The Worm Ouroboros.

‘The greatest and most convincing writer of invented worlds that I have read.’ – J.R.R. Tolkien

‘A new literary species, a new rhetoric, a new climate of the imagination. Every episode, every speech, helps to incarnate what the author is imagining.’ – C.S. Lewis

‘An eccentric masterpiece. Eddison is unequalled in the vigour, the vividness, the passionate intensity of his imagining, the brooding sadness that underlies it, and the cockeyed magnificence of his language.’ – Ursula K. Le Guin

‘A fantasy epic written in a lush, thick, cod-Elizabethan style that started off irritating and then became part of the fun.’ – Neil Gaiman

‘The greatest high fantasy of them all.’ – Robert Silverberg

‘Authentic dream, fantastic far beyond invention and natural beyond all possibility of unbelief.’ – Arthur Ransome

‘A romance of a world that never was … its landscapes are magnificent. One lives in it.’ – Hilaire Belloc

Eric Rucker Eddison was born in Adel, England, in 1882. His parents encouraged his spirited imagination. Boyhood days spent reading and adventuring in the northern English countryside with his constant companion, Arthur Ransome, provided rich material for his novels. Eddison was twice honoured, receiving the Order of St. Michael and St. George (1924) and the Order of the Bath (1929) for public service with the Board of Trade. His writings include the first complete translation of the Icelandic epic, Egil’s Saga; the novels The Worm Oroboros and Stybiorn the Strong; and the trilogy Zimiamvia, including Mistress of Mistresses, A Fish Dinner in Memison, and the final book, The Mezentian Gate, which was left unfinished when he died suddenly of a stroke in 1945.

Other Works by E. R. Eddison