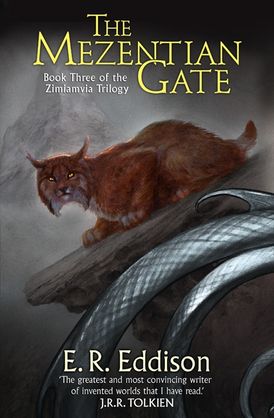 The third volume in the classic epic trilogy of parallel worlds, admired by Tolkien and the great prototype for The Lord of the Rings and modern fantasy fiction.

E. R. Eddison was the author of three of the most remarkable fantasies in the English language: The Worm Ouroboros, Mistress of Mistresses and A Fish Dinner in Memison. Linked together as separate parts of one vast romantic epic, fans who clamoured for more were finally rewarded 13 years after Eddison’s death with the publication of the uncompleted fourth novel, written during the dark years of the Second World War.

This new edition of The Mezentian Gate includes additional narrative fragments of the story missing from the original 1958 edition. Together with an illuminating introduction by Eddison scholar Paul Edmund Thomas, this volume returns Edward Lessingham to the extravagant realm of Zimiamvia and concludes one of the most extraordinary and influential fantasy series ever written.

Eric Rucker Eddison was born in Adel, England, in 1882. His parents encouraged his spirited imagination. Boyhood days spent reading and adventuring in the northern English countryside with his constant companion, Arthur Ransome, provided rich material for his novels. Eddison was twice honoured, receiving the Order of St. Michael and St. George (1924) and the Order of the Bath (1929) for public service with the Board of Trade. His writings include the first complete translation of the Icelandic epic, Egil’s Saga; the novels The Worm Oroboros and Stybiorn the Strong; and the trilogy Zimiamvia, including Mistress of Mistresses, A Fish Dinner in Memison, and the final book, The Mezentian Gate, which was left unfinished when he died suddenly of a stroke in 1945.

Other Works by E. R. Eddison

The Worm Ouroboros: The Prelude to Zimiamvia