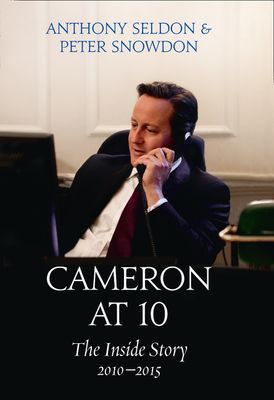 Five years in the making, ‘Cameron at 10’ is the gripping inside story of the Cameron premiership, based on over 300 in-depth interviews with senior figures in 10 Downing Street, including the Prime Minister himself.

As dusk descended on 11 May 2010, David Cameron entered 10 Downing Street as the youngest prime minister since Lord Liverpool in 1812. He stood at the head of the first Coalition government in 65 years, with the country in dire economic straits following a deep financial crisis.

From the early heady days of the Rose Garden partnership with the Liberal Democrats to the most bitterly contested general election in years, ‘Cameron at 10’ highlights forty dramatic moments in an exceptionally turbulent period in British politics. The book contains all the highs and lows on the domestic front as well as providing revealing insights into the Prime Minister’s relationships with foreign leaders, particularly the German Chancellor Angela Merkel and US President Barack Obama.

With unprecedented access to the ‘inner circle’ of politicians and civil servants that surround the Prime Minister, from Chancellor George Osborne and former Deputy Prime Minister Nick Clegg to all of Cameron’s personal team, this is the most intimate account of a serving prime minister that has ever been published.

Anthony Seldon is the author of multiple volumes on the premiership from Edward Heath to Gordon Brown, and is considered one of Britain’s pre-eminent political biographers and contemporary historians. He is the former head of one of the country’s leading independent schools, Wellington College, and has recently been appointed Vice-Chancellor of Buckingham University.

Peter Snowdon is a journalist and historian, and duty edits BBC Radio 4’s flagship ‘Today’ Programme. He has written the unrivalled account of the Conservative Party’s return to power under David Cameron, ‘Back from the Brink’, described by Daniel Finkelstein as ‘a superb new history of the last decade in Tory politics’.

The authors have collaborated on several books together, including the twin volume biography of Tony Blair – ‘Blair’ and ‘Blair Unbound’.

Other Works by Peter Snowdon

Cameron at 10: The Verdict