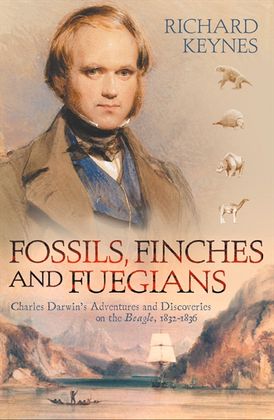 A narrative account of Darwin’s historic 4-year voyage on the Beagle to South America, Australia and the Pacific in the 1830s that combines the adventure and excitement of Alan Moorehead’s famous (and now out of print) account with an expert assessment of the scientific discoveries of that journey. The author is Charles Darwin’s great-grandson.

• In his autobiography, Charles Darwin wrote: ‘The voyage of the Beagle has been by far the most important event in my life and has determined my whole career; yet it depended on so small a circumstance as my uncle offering to drive me 30 miles to Shrewsbury, which few uncles would have done, and on such a trifle as the shape of my nose. I have always felt that I owe to the voyage the first real training or education of my mind. I was led to attend closely to several branches of natural history, and thus my powers of observation were improved, though they were already fairly developed. The investigation of the geology of all the places visited was far more important, as reasoning here comes into play.’

No biography of Darwin has yet done justice to what the scientific research actually was that occupied Darwin during the voyage. Keynes shows exactly how Darwin’s geological researches and his observations on natural history sowed the seeds of his revolutionary theory of evolution, and led to the writing of his great works on The Origin of Species and The Descent of Man.

Professor Richard Keynes is the great-grandson of Charles Darwin. A Fellow of the Royal Society since 1959 and a former Professor of Physiology at Cambridge University, Richard Keynes has edited a number of Darwin publications – including The Beagle Record and Charles Darwin’s Beagle Diary. He lives in Cambridge.

Other Works by Richard Keynes