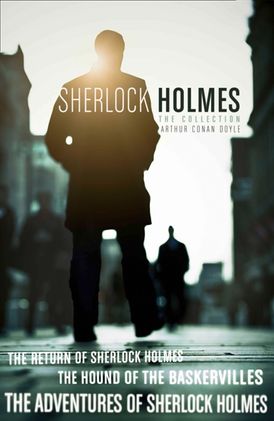 Collins Classics brings you a selection of the best-loved stories by Arthur Conan Doyle, featuring one of literature’s favourite detectives, Sherlock Holmes.

Who introduced Dr Watson to the world’s greatest detective? What killed Sir Charles Baskerville? And how did Sherlock Holmes escape certain death at the Reichenbach Falls? This collection of original tales by Sir Arthur Conan Doyle reveals all!

Since his debut in the Strand magazine over a hundred years ago, Sherlock Holmes and his thrilling adventures have entertained millions of readers - rediscover the original stories that made Holmes a household name.

THE ADVENTURES OF SHERLOCK HOLMES: Set against the foggy, mysterious backdrops of Victorian London and an English countryside heaving with secret menace, these are the first twelve stories ever published to feature Sherlock Holmes and his sidekick Dr Watson.

THE HOUND OF THE BASKERVILLES: Conan Doyle’s best known novel follows Holmes and Watson as they investigate the mysterious demise of Sir Charles Baskerville, whose body is found on the desolate Devonshire moors. Is his death related to a supernatural curse?

THE RETURN OF SHERLOCK HOLMES: Three years after the supposed death of Sherlock Holmes and his archenemy Professor Moriarty in the torrent of the Reichenbach Falls, a mysterious figure appears to the ever-loyal Dr Watson.

Complete with a Life & Times section, which offers insight into the author, his works and the time of publication, and a handy glossary adapted from the Collins English Dictionary, this Collins Classics Collection will enhance your reading experience of Arthur Conan Doyle’s novels.

‘Sherlock Holmes's best … remains a classic.’ The Times [on ‘The Hound of the Baskervilles’]

Sir Arthur Conan Doyle was born in Edinburgh, Scotland, in 1859. Before starting his writing career, Doyle attended medical school, where he met the professor who would later inspire his most famous creation, Sherlock Holmes. A Study in Scarlet was Doyle's first novel; he would go on to write more than sixty stories featuring Sherlock Holmes. He died in England in 1930.

Other Works by Arthur Conan Doyle

His Last Bow: Some Reminiscences of Sherlock Holmes (Collins Classics)

A Study in Scarlet: A Sherlock Holmes Adventure (Collins Classics)