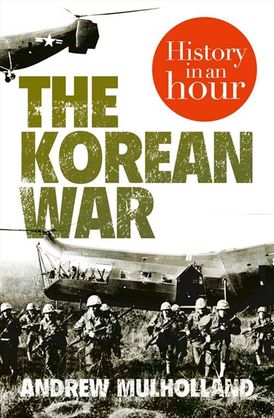 Love history? Know your stuff with History in an Hour.

Bringing together the military mights of the Soviet Union, China, North Korea, South Korea, the United Kingdom and the United Nations States, the Korean War raged for three years from 1950 to 1953. Not only the result of a carving of Korean territories following the Pacific conflicts of the Second World War, it was also a battle of ideologies as General MacArthur’s American military forces occupied the southern half and Stalin’s Soviet forced supported the northern half.

Initiated by infantry movements and air raids, the region gradually became mired in a static trench war by July 1951, and would continue to cost both sides in both morale and human lives. The Korean War: History in an Hour is the concise story to one of the most bitter and enduring conflicts of the post-war era.

‘If the past is a foreign country, History in an Hour is like a high-class tour operator, offering delightfully enjoyable short breaks in the rich and diverse continent of our shared past.’ Dominic Sandbrook

‘The practice of History is ever-evolving, and the History In an Hour idea brings it back up to date for the digital age. Colley writes in an attractively readable style, and manages to convey the huge story that is WWII in a logical and accessible manner’ Andrew Roberts, Bookseller

‘This is genius’ MacWorld.com

Andrew Mulholland spent twenty five years in government, working both nationally and locally. He now splits his time between olive farming and writing, which he regards as a far saner life balance. He holds degrees in Politics and War Studies and has long had a passion for history.

Other Works by Andrew Mulholland