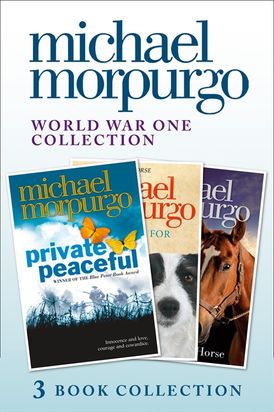 ‘Private Peaceful’:
Told in the voice of a young soldier, Private Peaceful follows twenty-four hours in the trenches during WW I, capturing his memories as he looks back over his life. It’s both a love story and a deeply moving account of the horrors of the First World War. A must-read.

‘A Medal for Leroy’:
Michael doesn’t remember his father, an RAF pilot lost in the war. And his French mother, heartbroken and passionate, doesn’t like to talk about her husband. But then Auntie Snowdrop gives Michael a medal, followed by a photograph, which begin to reveal a hidden history.

‘Farm Boy’:
The fascinating sequel to ‘War Horse’. Set on a farm in rural Devon, this is the story of Grandpa’s memories. Family secrets come to light as Michael’s wonderful writing depicts the moving relationship between grandfather and grandson.

Praise for Private Peaceful:
“His [Tommo’s] journey from agricultural labourer to cannon fodder is movingly told…Michael Morpurgo is expert at getting through to his readers. He writes here about events that should never be forgotten nor forgiven, and does so most effectively.”
Independent

“…full of warmth as well as grief, conveying vividly how precious it is to be alive…”
Sunday Times

“The best novel he’s written since The Butterfly Lion.”
Times

“Deserved to last as an insight into the First World War in the same way as, say, The Silver Sword or Goodnight Mr Tom.”
Telegraph

Praise for Shadow:
“As ever, Morpurgo's warmth and humanity suffuse a story of courage, love and hope.” Amanda Craig in the Times

Michael Morpurgo OBE is one of Britain's best loved writers for children, with sales of over 35 million copies. He has written over 150 books, has served as Children’s Laureate, and has won many prizes, including the Smarties Prize, the Writers Guild Award, the Whitbread Award, the Blue Peter Book Award and the Eleanor Farjeon Lifetime Achievement Award. With his wife, Clare, he is the co-founder of Farms for City Children. Michael was knighted in 2018 for services to literature and charity.

When Fishes Flew: The Story of Elena’s War