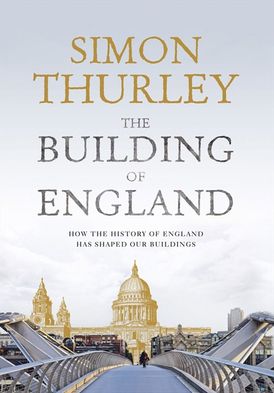 From awe-inspiring Norman castles, to the skyscrapers of today, Simon Thurley explores how the architecture of this small island influenced the world.

The Building of England puts into context the significance of a country’s architectural history and unearths how it is inextricably linked to the cultural past – and present.

Saxon, Tudor, Georgian, Regency, even Victorian and Edwardian are all well-recognised architectural styles, displaying the influence of the events that mark each period. Thurley looks at how the architecture of England has evolved over a thousand years, uncovering the beliefs, ideas and aspirations of the people who commissioned them, built them and lived in them. He tells the fascinating story of the development of architecture and the advancements in both structural performance and aesthetic effect.

Richly illustrated with over 500 drawings, photographs and maps, Simon Thurley traces the history and contemplates the future of the buildings that have made England.

‘This is a truly stupendous achievement. Thurley […] is one of the best architectural historians alive in the world – a real scholar. [The book] is an instant classic. Every household should have one […] This is a beautiful object, crammed with superb colour photographs and ground plans and elevations.’ A. N. Wilson, Evening Standard

‘This is an impressive book – for its scholarship, for its easy didacticism, for the care with which Thurley has thought things through, and for its inclusiveness. “A bicycle shed is a building; Lincoln Cathedral is a piece of architecture,” said the great architectural historian Nikolaus Pevsner: Thurley shows that both have a story to tell.’ The Sunday Times

‘[…] the rarest of things – a coffee table book that is also supremely engaging to read.’ Bill Bryson, The Times

‘The text is engagingly written, authoritative and lavishly produced – a revelation and a delight.’ Country Life

Simon Thurley is a leading historian of English architecture, the Provost of Gresham College, Chair of the National Lottery Heritage Fund and a Senior Research Fellow at the Institute of Historical Research. For 13 years he was chief executive of English Heritage, responsible for heritage protection and for the National Heritage Collection of 420 sites and monuments including Stonehenge. Before that he was director of the Museum of London and Curator of Historic Royal Palaces. He has written 12 books and made many television programmes about historic buildings.