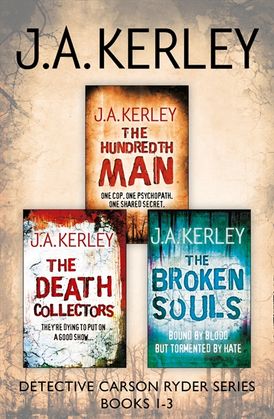 THE HUNDREDTH MAN: A body is found in the sweating heat of an Alabama night; headless, words inked on the skin. Detective Carson Ryder is good at this sort of thing – crazies and freaks. To his eyes this is the work of a serial killer – and when another mutilated victim turns up his suspicions are confirmed.

Famous for solving a series of crimes the year before, Carson Ryder has experience with psychopaths. But he had help with that case – from a past he is trying to forget. Now he needs it again.

When the truth begins to dawn, it shines on an evil so twisted, so dangerous, it could destroy everything that Carson cares about.

THE DEATH COLLECTORS: Thirty years after his death, Marsden Hexcamp's ‘Art of the Final Moment’ remains as sought after as ever. But this is no ordinary collection. Half a dozen victims were slowly tortured to death so that their final agonies could be distilled into art.

When tiny scraps of Hexcamp's ‘art’ start appearing at murder scenes alongside gruesomely displayed corpses, Detective Carson Ryder and his partner Harry Nautilus must go back three decades in search of answers.

THE BROKEN SOULS: The gore-sodden horror that greets homicide detective Carson Ryder on a late-night call out is enough to make him want to quit the case. Too late.

Now he and his partner Harry are up to their necks in a Southern swamp of the bizarre and disturbing. An investigation full of twists and strange clues looks like it's leading to the city's least likely suspects – a powerful family whose philanthropy has made them famous. But behind their money and smiles is a dynasty divided by hate.

Their strange and horrific past is about to engulf everyone around them in a storm of violence and depravity. And Ryder's right in the middle of it…

Praise for the Carson Ryder series:

'Kerley will truly scare the pants off his readers. This one's another winner from a writer moving towards the top of the thriller heap' Publishers Weekly

'Kerley, who writes like a house fire, has a boundless and truly ghastly imagination that'll keep you awake long after you turn the last page' Kirkus Reviews

'A fascinating and frightening take on the genre' Independent on Sunday

'A chilling journey into a pitch-black mind' Michael Marshall, author of The Straw Men trilogy

'A sturdy hero with a clearcut mission and a setting that holds possibilities for fresh adventure. Kerley writes in a thrusting style that pushes the action from crime scene to autopsy table' New York Times Book Review

J.A. Kerley spent years as an advertising agency writer and producer before his wife demanded he quit work and write a novel, which he thought a fine idea. The result was The Hundredth Man, the first in the Carson Ryder series. An avid angler, canoeist and hiker, Kerley has traveled extensively throughout the South, especially coastal regions such as Mobile, Alabama, the setting for many of his novels, and the Florida Keys. He has a cabin in the Kentucky mountains, which appeared as a setting in Buried Alive. He lives in Newport, Kentucky, where he enjoys sitting on the levee and watching the barges rumble up and down the Ohio River.

Other Works by J. A. Kerley