The Hobbit and The Lord of the Rings: Boxed Set 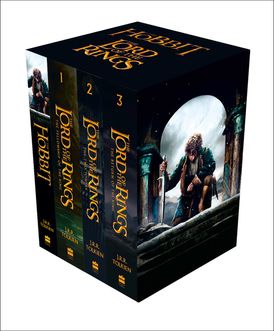 The Hobbit and The Lord of the Rings: Boxed Set

Immerse yourself in Middle-earth with Tolkien’s classic masterpieces behind the films, telling the complete story of Bilbo Baggins and the Hobbits’ epic encounters with Gandalf, Gollum, dragons and monsters, in the quest to destroy the One Ring.

When they were first published, The Hobbit and The Lord of the Rings became instant classics. Treasured by readers young and old, these works of sweeping fantasy, steeped in unrivalled magic and otherworldliness have sold more than 150 million copies around the world.

This new boxed gift set, published to celebrate the release of the first of Peter Jackson’s three-part film adaptation of JRR Tolkien’s The Hobbit, THE HOBBIT: AN UNEXPECTED JOURNEY, contains both titles and features cover images from both films.

It offers readers a new opportunity to discover Tolkien’s remarkable world of Middle-earth and to follow the complete story of Bilbo Baggins and the Hobbits’ part in the epic quest for the Ring – beginning with Bilbo’s fateful visit from Gandalf and culminating in the dramatic climax between Frodo and Gollum atop Mount Doom.

J.R.R. Tolkien is best known for The Hobbit and The Lord of the Rings, selling 150 million copies in more than 60 languages worldwide. He died in 1973 at the age of 81.

Christopher Tolkien, born on 21 November 1924, was the third son of J.R.R. Tolkien. During the Second World War he served in the Royal Air Force and the Fleet Air Arm as a pilot. At the end of the war he returned to Oxford University and became a Fellow and Tutor in English of New College in 1964, lecturing in the University on early English and northern literature. Appointed by J.R.R. Tolkien to be his literary executor, he devoted himself after his father’s death in 1973 to the editing and publication of unpublished writings, notably The Silmarillion, Unfinished Tales, the twelve volumes collectively known as The History of Middle-earth, and The Children of Húrin, Beren and Lúthien and The Fall of Gondolin. In 1975 he moved with his wife Baillie to live in France. He died in 2020 at the age of 95.