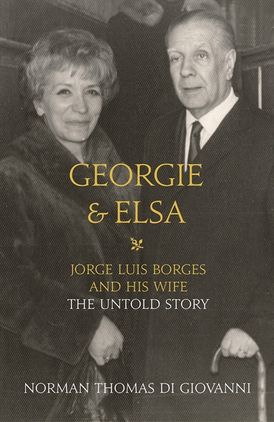 A biography of Borges, by his translator.

Jorge Luis Borges, known as Georgie to his friends, married Elsa Astete Millán in 1967. Borges was sixty-eight years old at the time of the wedding; Elsa, a widow,
with a son in his twenties, was eleven years younger.

It proved to be a tempestuous and eventful marriage that would leave an indelible mark on the remainder of Borges’ life, but their relationship has been largely glossed over by previous biographers. This is because the one person who knew all the details has refused to speak about it.

Norman Thomas di Giovanni worked with Borges in Cambridge, Massachusetts, and in Buenos Aires from late 1967 to 1972 and thereafter sporadically until Borges’s death in 1986. During their first period together di Giovanni spent more time with the couple than did almost anyone else. He was privy to the private side of their relationship and to its sudden decline. It was di Giovanni who helped the demoralized Borges by organizing and arranging his divorce and at the same time rescuing his library and smuggling him out of Buenos Aires to avoid the wrath of Elsa and her lawyers.

The book is based on the author’s extensive collection of original material in the form of diaries, notebooks, letters, manuscripts, and photographs, most of which has never before been seen. It provides a unique insight into one of the few true geniuses of literature.

'A long, satisfying and penetrating gaze into the private life of an acknowledged genius, his work, his evasions, and his peculiar heartaches, "Georgie & Elsa" is the book that all lovers of Borges have longed for. It is a poignant story, at times a dark and hilarious narrative, and the most accurate portrait of the man and his method, by his closest collaborator and best translator.' PAUL THEROUX

'A ringside seat at an ill-fated marriage.' TIMES LITERARY SUPPLEMENT

‘This is a brilliant book – searing, unputdownable, fair minded, scrupulous and a real corrective to the Borges industry and the nonsense that industry promulgates.’ CARLO GEBLER

‘Di Giovanni’s book is the most explicit record one is likely to read of a writer’s domestic unhappiness.’ THE SPECTATOR

‘A hugely funny book that shrugs off the bizarre cloak of quasi-religious deference that has been shrouding Borges since his death.’ CATHOLIC HERALD

The Lesson of the Master