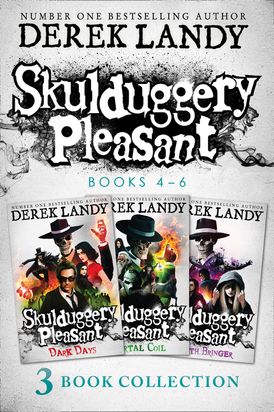 Together for the first time, books 4, 5 and 6 in the Skulduggery Pleasant – the biggest, funniest, most thrilling comedy-horror-adventure series in the universe! From number-one-bestselling author Derek Landy.

Book 4: DARK DAYS. Skulduggery pleasant is gone, sucked into a parallel dimension. There is no official, Sanctuary-approved plan to save him. But Valkyrie’s never had much time for plans…

Book 5: MORTAL COIL. With Valkyrie struggling to protect her dark secret, Skulduggery and the gang are more vulnerable than ever, just as a plague of body-snatching Remnants are released upon the world…

Book 6: DEATH BRINGER. The Death Bringer has risen. Skulduggery and Valkyrie have seven days to uncover the Necromancers’ secret before it’s too late. The clock is ticking. Lord Vile is loose. And after this one, nothing will ever be the same again.

‘Landy [has the] ability to craft an engaging story from start to finish.’ Inis

‘Derek Landy has been something of a publishing phenomenon.’ Irish Post

‘Death Bringer may have just usurped Mortal Coil and could now be my favourite book in the series’ Bookzone4boys.com

'Skulduggery Pleasant serves up a thoroughly satisfying blend of humour, magic and adventure. Once you've met Stephanie and Skullduggery, you'll be clamouring for a sequel.' Rick Riordan, author of the PERCY JACKSON series

‘Landy's witty style will win him fans of all ages … It's a good job Harry's [Potter] resigning before he's forcibly retired.’ Irish Mail on Sunday

Derek Landy lives near Dublin. Before writing his children's story about a sharply-dressed skeleton detective, he wrote the screenplays for a zombie movie and a murderous horror film. "I think my career-guidance teacher is spinning in her grave," he says, "or she would be if she were dead."

Other Works by Derek Landy

The Dying of the Light (Skulduggery Pleasant, Book 9)