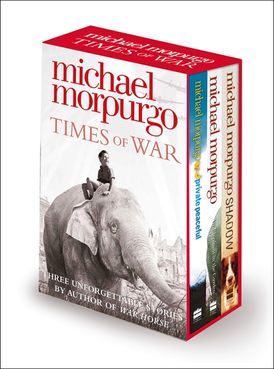 A stunning paperback collection of classic Morpurgo novels set in World War I, World War II and the Afghanistan conflict.

Told in the voice of a young soldier, Private Peaceful follows twenty-four hours in his life at the front during WW I, capturing his memories as he looks back over his life. It’s both a love story and a deeply moving account of the horrors of the First World War.

In An Elephant in the Garden, Elizabeth's father is fighting on the eastern front in WW II and her mother is working at Dresden zoo when the bombs start to fall. Their home destroyed, Elizabeth’s family must flee through the wintery landscape, avoiding the Russian troops who are drawing ever closer. It would be hard enough, without an elephant in tow…

Shadow is the story of Aman, a boy from Afghanistan fleeing the horror of war. A western dog shows up outside the caves where Aman lives with his mother. When they finally decide to make a bid for freedom, Shadow will not leave their side. The destinies of boy and dog are linked, always.

Michael Morpurgo OBE is one of Britain's best loved writers for children, with sales of over 35 million copies. He has written over 150 books, has served as Children’s Laureate, and has won many prizes, including the Smarties Prize, the Writers Guild Award, the Whitbread Award, the Blue Peter Book Award and the Eleanor Farjeon Lifetime Achievement Award. With his wife, Clare, he is the co-founder of Farms for City Children. Michael was knighted in 2018 for services to literature and charity.

A Medal for Leroy

Sparrow: The Story of Joan of Arc