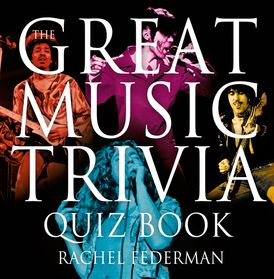 The Ultimate Guide to Proving You Know Everything About Music…

Now music snobs can test their musical savvy about everything from acid techno to folk metal. THE GREAT MUSIC TRIVIA QUIZ BOOK covers all musical genres with a focus on rock and pop from the 1960s through today.You may know that Bono’s real name is Paul Hewson and that John Lennon was featured on the first cover of Rolling Stone, but it might surprise you to learn that compact discs have been on the market since 1982, that the title of AC/DC’s 8th album, “For Those About to Rock, Salute You” is a reference to Roman gladiators, and that music was first transmitted over phone lines in the 19th century.

A variety of quiz formats from multiple choice questions to matching lists are accompanied by timed challenges, colourful anecdotes, and sidebar explanations. Featuring chapters like VIDEOS THAT KILLED THE RADIO STARS and OOPS, I DIDN’T DO IT AGAIN (the sad fate of one-hit wonders.) You might nab a high score in classic rock, but how will you score in hip hop? And maybe it’s time to find out if your knowledge of jazz is as extensive as your taste for movie soundtracks.

For the tone deaf and the virtuosos, for those who claim to be authorities and those who want to learn more, for the musical theorists and the X Factor fanatics, this collection of music trivia is fun to play on your own, ideal to test friends in the pub, or intriguing to simply read for the surprising facts and behind-the-scenes trivia.

Rachel Federman is the author of GIRL DRINKS: 101 COCKTAILS FOR EVERY OCCASION and TEST YOUR DOG: THE DOG IQ TEST. She is the lead singer and bassist for her band, Dimestore Scenario. She lives in Brooklyn, NY.

Other Works by Rachel Federman

Mermania: The Little Book of Mermaids

Test Your Dog: Is Your Dog an Undiscovered Genius?

Grossopedia: A Startling Collection of Repulsive Trivia You Won’t Want to Know!