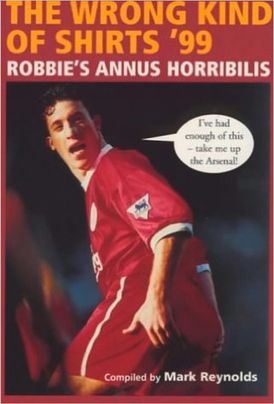 Even Big Ron, man of a thousand, quips was hard pressed to do justice to the glories of the season: beaten 8-1 by Manchester United he nobly offered ‘I was expecting a nine-goal thriller’, proving that even with the firing squad loading up, there is room for wit at the sharp end of soccer’s dreams.

And as Forest, absent Van Hooijdonk and sacked Dave Bassett and all, doomed themselves to a quick return to the Endsleigh League, Ferguson, Wenger and Vialli created new routines for the old mind games to psych each other up. Glenn Hoddle completed his final massacre of English syntax as the England manager, surpassed in his waywardness only by Eileen Drewery’s helpful offerings. Graeme Le Saux and Robbie Fowler had an erudite discussion about what substances the male body can healthily ingest and by what orifices, David Davies became ever so circumspect in his attempt to climb the FA pole and almost everyone enjoyed Kevin Keegan’s return to the big time at Fulham. As England manager for four games only, supposedly, his appointment was as celebtrated as Mark Lawrenson’s at Newcastle: nice idea, probably won’t work, but should produce plenty of good copy. Which is what is collected here in another selection of the highlights and lowlights of the football year in its most quotable form.