Life on Mars: A Fistful of Knuckles 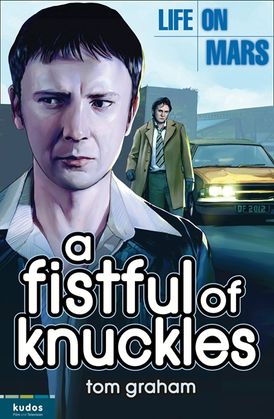 Life on Mars: A Fistful of Knuckles

Time to leap into the Cortina as Sam Tyler and Gene Hunt roar back into action in a brand new installment of Life on Mars.

DCI Gene Hunt plunges into the boxing underworld – and this time, the gloves are coming off!

The travelling fair has rolled into town, but it has brought with it more than just dodgem cars and candy floss. A young boxer is found brutally murdered, and as Sam Tyler and Gene Hunt delve deeper into the case, it leads them behind the gaudy lights and painted caravans of the fairground, into the shadowy underbelly of bare-knuckle gypsy brawlers and bloody illegal fights.

But Sam is coping with more than just police work. He is still being plagued by The Test Card Girl with horrifying visions of the terrible doom that awaits he and Annie. What is this monstrous presence that is pursuing them both? Can Sam find a way of defeating this remorseless evil – or are their fates sealed?

Violence, murder, betrayal and revenge. Could this be a case so macho that it will see even the mighty Guv himself on the ropes?

Tom Graham left school at 14 without qualifications. He is a smoker, and says that writing the Life on Mars novels is the nearest thing he’s had to a regular job since he got banned from driving. He part-owns a greyhound called Arthur and his ambition is to get fruity with Raquel Welch (to be clear about it, that’s Tom’s ambition, not Arthur’s).

Other Works by Tom Graham

Life on Mars: Get Cartwright