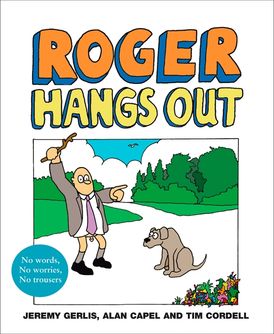 The further silent adventures of the trouserless man, who now extends his half-dressed antics outside the office onto an unsuspecting world…

Enter the extraordinarily ordinary world of a half-dressed man.

In the world of ROGER, silence speaks volumes, whether in the workplace, at leisure, or on his travels.

Following his debut collection of captionless cartoons in 2006, this follow-up book sees ROGER outside the womb-like comfort zone of the office and follows his bemused antics in the domestic environment. While dreams of being half-dressed would terrify most ordinary souls, ROGER goes out-and-about with remarkable calm dreamily abandoning his trousers and causing mayhem as he goes about his mundane life – at home, shopping, travelling and at play.

In the office, ROGER seemed content forever to hold his peace – now he is at large, his reputation will continue to precede him…

'The workplace can strip you of personality and dignity. This fear of being made vulnerable is behind the appeal of a new cartoon set to become a bestseller.'
The Times

Jeremy Gerlis, Alan Capel and Tim Cordell are fully grown, fully clothed and very serious cartoonists – and there’s a little bit of ROGER in all of them.

Alan Capel, 41, was born in Leicester and possesses a completely useless degree in 'Leisure studies'. In later life he set up his own cartooning and illustrating business under the Enterprise Allowance scheme. He is now a widely published cartoonist, including a 'tremendous caveman gag' in Private Eye. He does have a proper job however and has spent the last 16 years either working in the photography industry or supporting Leicester City.

Tim Cordell, 45, was born in London and studied psychology at Lancaster University. Over the years, Tim has won numerous awards as both copywriter and art director for many of London's leading international advertising agencies. Years of idle doodling on layout pads led to a parallel career as a cartoonist, with work being published in Private Eye, Punch and The Sun amongst others. He lives in North London.

Other Works by Tim Cordell