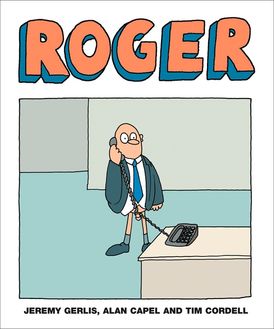 The deadpan cartoon adventures of an expressionless, wordless, trouserless man, whose presence seems to go unnoticed.

Enter the extraordinarily ordinary world of a half-dressed man.

In the world of ROGER, silence speaks volumes, whether in the workplace, at leisure, or on his travels.

In this debut collection of captionless cartoons, we share in the mundane, deadpan adventures of an expressionless, wordless, harmless man, whose full-on, half-dressed presence only we seem to notice.

Tied to the workplace, but freed from the shackles of his lower garments, ROGER continues to go about his business in his own unassuming and bemused fashion.

Who is he? What is he thinking? Where are his trousers? These are all questions to which perhaps only ROGER has the answer, but for now he's content to hold his peace.

This textless, trouserless book opens a window on to ROGER's life at work and promises to stand out from the crowd. As ROGER might say, if only he spoke – bring it up, bring it on, bring it out…

'The workplace can strip you of personality and dignity. This fear of being made vulnerable is behind the appeal of a new cartoon set to become a bestseller.'
The Times

Jeremy Gerlis, Alan Capel and Tim Cordell are fully grown, fully clothed and very serious cartoonists – and there’s a little bit of ROGER in all of them.

Alan Capel, 41, was born in Leicester and possesses a completely useless degree in 'Leisure studies'. In later life he set up his own cartooning and illustrating business under the Enterprise Allowance scheme. He is now a widely published cartoonist, including a 'tremendous caveman gag' in Private Eye. He does have a proper job however and has spent the last 16 years either working in the photography industry or supporting Leicester City.

Tim Cordell, 45, was born in London and studied psychology at Lancaster University. Over the years, Tim has won numerous awards as both copywriter and art director for many of London's leading international advertising agencies. Years of idle doodling on layout pads led to a parallel career as a cartoonist, with work being published in Private Eye, Punch and The Sun amongst others. He lives in North London.

Other Works by Tim Cordell