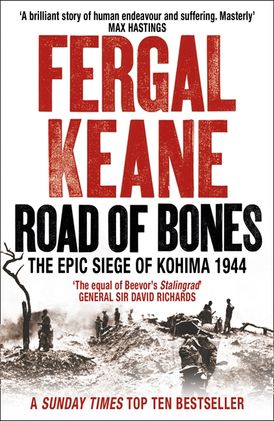 (This ebook contains a limited number of illustrations. Maps are best viewed on a tablet.)

The epic story of one of the most savage battles of the Second World War.

Kohima. In this remote Indian village near the border with Burma, a tiny force of British and Indian troops faced the might of the Imperial Japanese Army. Outnumbered ten to one, the defenders fought the Japanese hand to hand in a battle that was amongst the most savage in modern warfare.

A garrison of no more than 1,500 fighting men, desperately short of water and with the wounded compelled to lie in the open, faced a force of 15,000 Japanese. They held the pass and prevented a Japanese victory that would have proved disastrous for the British. Another six weeks of bitter fighting followed as British and Indian reinforcements strove to drive the enemy out of India. When the battle was over, a Japanese army that had invaded India on a mission of imperial conquest had suffered the worst defeat in its history. Thousands of men lay dead on a devastated landscape, while tens of thousands more Japanese starved in a catastrophic retreat eastwards. They called the journey back to Burma the ‘Road of Bones’, as friends and comrades committed suicide or dropped dead from hunger along the jungle paths.

Fergal Keane has reported for the BBC from conflicts on every continent over the past 25 years, and he brings to this work of history not only rigorous scholarship but a raw understanding of the pitiless nature of war. It is a story filled with vivid characters: the millionaire's son who refused a commission and was awarded a VC for his sacrifice in battle, the Roedean debutante who led a guerrilla band in the jungle, and the General who defied the orders of a hated superior in order to save the lives of his men. Based on original research in Japan, Britain and India, ‘Road of Bones’ is a story about extraordinary courage and the folly of imperial dreams.

‘Keane’s real distinction was in his reporting talents, which as this book shows, are considerable.’ Evening Standard

‘His book is a memoir but it is so much more than that…a volume of the most exquisitely written and moving truth and honesty.’ TLS

‘An empowering story of triumph over adversity.’ Irish Times

‘Fergal Keane operates masterfully on three levels, setting this, the last military stand of British empire, in a far wider campaign context…vivid, compelling and terrifying…Keane catches both shrinking revulsion and astounding courage to brilliant effect…I found myself, on one or two pages towards the close, caught in a choking emotion.The evidence is meticulously gathered and the writing so powerful that it turns a book about a battle into a book about human beings, their existence and their end.’ the guardian

‘In his sweeping account of the battle in Kohima in 1944, Fergal Keane does justice to the memory of the men who fell and who survived…a vivid account which brings to life the brutality of that war…an engrossing narrative of ghastly battle’The Independent

FERGAL KEANE OBE was born in London and educated in Ireland. He is one of the BBC’s most distinguished correspondents and has covered most of the world’s conflicts of the last thirty years. In 2020, he announced that he was stepping down as the BBC’s Africa editor because of his ongoing struggles with PTSD. His documentary film <i>Fergal Keane: Living with PTSD</i> was broadcast in May 2022. He is the author of several bestselling and award-winning books including<i> Letter to Daniel</i>, addressed to his newborn son, <i>Road of Bones</i>, about the siege of Kohima, and <i>Wounds</i>, which won the Christopher Ewart-Biggs Prize and the Irish Book of the Year Award for Non-Fiction. He has been awarded a BAFTA, an Emmy and the Orwell Prize for political writing. He continues to work for the BBC as a Special Correspondent