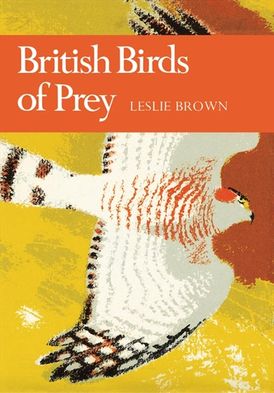 Leslie Brown's account of our 15 resident, 7 vagrant and 2 migrant species of eagles, falcons, hawks and vultures in Britain presents a great mass of scientific information about our birds of prey in a manner as attractive to the general reader as to the dedicated ornithologist.

The diurnal raptors are among the most arresting and dramatic of British bird species, from the magnificent and immense golden eagle of the Highlands to the more widespread but equally spectacular peregrine falcon and the frequent and adaptable kestrel of motorways and urban ledges.

Leslie Brown's account of our 15 resident, 7 vagrant and 2 migrant species of eagles, falcons, hawks and vultures in Britain presents a great mass of scientific information about these birds in a manner as attractive to the general reader as to the dedicated ornithologist. Each of the resident species is discussed in detail - its status, past and present; its feeding and hunting behaviour; its life history; its breeding behaviour; migration and the threats to its survival. Then the biology of the birds of prey, changes in their habitat and status, their food habits, breeding behaviour, their territories and populations are examined in depth in separate chapters.

An acknowledged world authority on birds of prey - co-author with Dean Amadon of Eagles, Hawks and Falcons of the World, and author of many other books besides - Leslie Brown is immensely enthusiastic; and the many tables, maps, figures and bibliography are all indicative of the thoroughness of his research.

'Leslie Brown's British Birds of Prey, which celebrates the 60th birthday, as it were, of the excellent New Naturalist series, is rich in observation, his own and other people's - much of the latter unpublished but willingly imparted - and, at intervals, warm with righteous, well-documented indignation.'
Daily Telegraph

'Few naturalists or would-be naturalists can have anything but praise for the New Naturalist series, and this latest volume, British Birds of Prey, is no exception. Leslie Brown's book is bound to be welcomed by ornithologists everywhere and by general readers too. If Brown set out to produce an in-depth study of a fascinating subject in a highly-readable format then he has succeeded.'
New Scientist

'Quite the best study yet made of Britain's twenty-four diurnal raptors. Leslie Brown is an eloquent and enthusiastic champion of birds of prey; he is also hard-hitting and forthright in his opinions. This impressive book should go a long way to furthering our understanding of these magnificent birds.'
Country Life

Other Works by Leslie. H. Brown