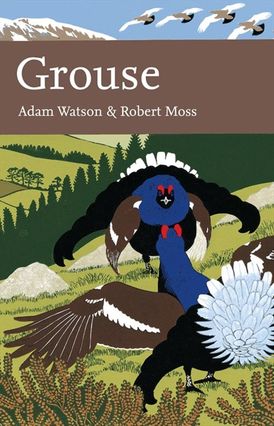 With less than twenty species worldwide and only four British and Irish species, the grouse is surprisingly well-known. Its habitats are diverse and relatively remote – ranging from deep forests, through open moorland, to Scotland’s highest peaks.

‘Grouse: The Natural History of British and Irish Species’ covers four of the most emblematic species of our upland regions. Collectively they have the most fascinating life histories of any bird group, individually they have their own stories to tell: the ptarmigan is a resident of our highest mountain areas, the black grouse is famous for its extraordinary mating displays, the capercaillie is one of our largest birds and the red grouse, whilst no-longer one of the few British endemics, is one of the most heavily researched species. All four face similar problems, including habitat loss, predators, pests, disease and food shortage. This is compounded by issues of managed animal populations and controversy surrounding the commercial worth of grouse.

This volume in the New Naturalist series, written by two of the world's leading grouse specialists, offers a fascinating insight into the natural history and biology of these birds, including aspects of their behaviour, the historical relevance of their names, the reasons behind population fluctuations and international conservation efforts.

A History of Ornithology by Peter Bircham:

‘Bircham has found for himself a distinctive ecological niche by dwelling on the evolving science, rather than ornithology as social process or field activity … he has produced a thorough and valuable contribution to the field’
Mark Cocker, The Guardian

'This book has set a benchmark for future histories on this subject, though I'm guessing that there won't be many books that come along in the near future that offer a serious alternative to this extremely well-balanced and studious work.'
Birdwatch

The Isles of Scilly by Rosemary Parslow:

'This is a fully rounded and wonderfully detailed natural history of England's only ocean archipelago. It works on several levels, as a guide, as a wildlife encyclopaedia and as a lyrical celebration of a special place. Rosemary Parslow has written a classic book to add to the remarkable swell of New Naturalist masterpieces in recent years.'
British Wildlife

Aged 13, Adam Watson saw his first ptarmigan on a lone climb to Derry Cairngorm in 1943 and began to record numbers, and in the winter of 1951/2 studied them there for an honours degree at Aberdeen University. He has studied black grouse, capercaillie and Irish red grouse, and accompanied ecologists on their fieldwork in Iceland, Norway and Alaska.
Robert Moss graduated in honours biochemistry at University College London. He showed a keen interest in chemical aspects of the work on red grouse and has worked on red grouse, and also on ptarmigan, black grouse and capercaillie in Scotland. Abroad, he has studied Icelandic ptarmigan, and rock, willow and white-tailed ptarmigan, during a year based at the University of Alaska in Fairbanks.

Other Works by Robert Moss