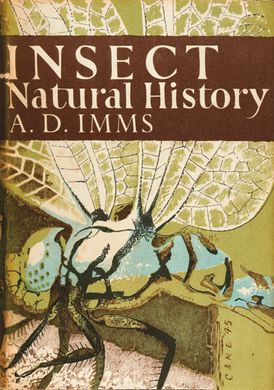 Insect Natural History introduces the reader to some of the latest discoveries and ideas about British Insects.

This volume deals with the natural history of British insects, and introduces the reader to some of the latest discoveries and ideas about them. The author has brought together within convenient compass a large amount of scientific knowledge, often of absorbing interest; and he describes many of the remarkable features associated with the lives of insects.

Only limited treatment is given to butterflies and moths, since there are several excellent books on these insects that are readily accessible, including Dr Ford's volume on Butterflies in the New Naturalist. When it comes to other insects, beetles, two-winged flies, plant-bugs, bees, lace-wings and the like, it is much less easy to find out much about them. Books on such insects are few and far between, and most of them are rather technical in character.

An increasing number of people are interested in the insects of our countryside, and this book is intended to fill at least some of their needs. It will increase their pleasure in observing the creatures with which it deals and may, perhaps, induce some of its readers to become independent observers. There is a great field to be explored by anyone who is drawn to look beneath the mere surface and study in detail any of the very commonest of our insects, no matter to what groups the latter may belong.

One of the special features of the book is the large number of colour photographs of different aspects of insect life. Almost all of these were taken by Mr. Beaufoy from the living insects. Mr. Beaufoy is an outstanding expert in nature photography. There are forty coloured plates, of which only seven were taken from dead and 'set' specimens.

The author is well-known in the world of biologists. Until recently he held the important post of Reader in Entomology at Cambridge. He has written several leading text books on entomology.

‘It is impossible to imagine a better introduction to the life of insects for the intelligent reader.’
John O’ London’s Weekly

‘Here is a wealth of information on almost every aspect of insect life, seasoned with the little oddities that add spice to any book. For anyone who wants to know about British insects, and who is afraid of the technicalities of the subject, or who shies at the usual dry presentation of it, this book is a complete answer to a prayer. It cannot be too highly praised, and the publishers are to be congratulated on a very fine production.’
Scottish Field

‘This volume of the New Naturalist Series is one which will be particularly welcome. The book is packed with interesting and astonishing facts. It is a book to possess, to read, and to come back to.’
Listener

‘Dr. Imms is in the best line of ‘popular’ entomologists. From encyclopaedic knowledge he writes what is in no sense an encyclopaedia but an introduction to the study of British insects. The illustrations are first-class.’
Birmingham Post

‘Insect Natural History keeps up the high level of the New Naturalist Series. It is a fascinating book and the colour photographs are a joy.’
The Guardian

‘Dr. Imms cloaks great knowledge and experience with simplicity. Altogether the book is a triumph.’
The Field

‘This series has an extraordinary knack of making the most amateurish amateur feel that there are observations of value that even he can make.’
Stephen Potter

Other Works by A. D. Imms