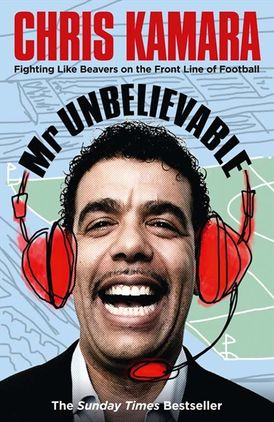 High jinx and japes from Soccer Saturday's roving reporter extraordinaire, Chris "Kammy" Kamara, whose boyish enthusiasm and often baffling, at-the-ground football reportage has given him cult status and an army of fans.

Over the past decade, football results programme Soccer Saturday has become a television phenomenon, delivering goals and drama via a raft of ex-professional players positioned in TV studios and on precarious gangplanks in rusting stadiums around the country.

At the heart of this success is free-wheeling pundit and roving reporter extraordinaire, Chris "Kammy" Kamara, the former footballer-turned-manager-turned-cult hero who has astounded and dumbfounded a legion of armchair fans with his crackpot catchphrases, hyperactive reporting style and Lionel Richie haircut.

Mr Unbelievable is his rags to riches tale. As a player, Kammy trawled football's outposts with the likes of Bradford City, Stoke City and Portsmouth where he suffered the slings, arrows and hurled bananas of racial abuse. Later, during the autumn of his career, he played in Howard Wilkinson's swashbuckling Leeds team where he rubbed shoulders with the likes of Eric Cantona.

On hanging up his boots, he moved into the dugouts at Bradford and Stoke as manager before joining the Sky football revolution as roving reporter on Soccer Saturday and Goal On Sunday's eagle-eyed analyst, amassing a raft of catchphrases along the way.

Mr Unbelievable is a hugely entertaining, moving, shocking and laugh out loud funny story of a genuine cult hero.

Chris "Kammy" Kamara was born in Middlesbrough on Christmas Day 1957. After serving in the Royal Navy, he made his debut for Portsmouth in 1975 and embarked on a professional playing career that spanned 20 years, well over 600 League appearances, and nine different clubs (count them): Portsmouth, Swindon Town, Brentford, Stoke City, Leeds United, Luton Town, Sheffield United, Middlesbrough and Bradford City. He also managed Bradford City and Stoke City.
Once feared as a football hard man and combative midfield enforcer, Kamara is now the affable, hugely popular SkySports presenter who hosts Goals on Sunday and, most famously, puts in excitable weekly shifts on Jeff Stelling's cult show Soccer Saturday. It is Kamara's trademark enthusiasm and idiosyncratic turn of phrase, delivered from various wind-swept gangplanks from up and down the country, that have firmly cemented his place in the nation's affections.

Other Works by Chris Kamara