JLS: Just Between Us: Our Private Diary 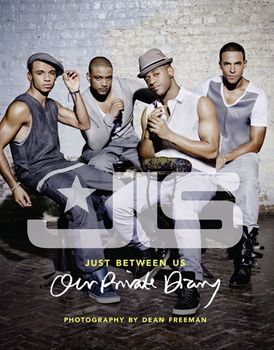 JLS: Just Between Us: Our Private Diary

With a triple platinum no. 1 album, two no. 1 singles, two Brits, two MOBO awards, a sell-out UK tour and a no. 1 bestselling book, it has been quite a year for JLS! Follow them backstage in this private diary and discover what life is like as the UK's hottest boy band!

By far the most successful band ever to come out of the X Factor, JLS went from strength to strength in 2009 and are set to become one of the biggest boy bands the UK has ever seen. With their loyal legion of screaming fans, JLS are a true pop sensation.

Since finishing X Factor - as the first band ever to make the finals - the boys have achieved things that did not seem possible 12 months ago. Two no. 1 singles, a no. 1 bestselling book, a no.1 album, two Brits and two MOBO Awards are just a few of the amazing list of achievements that JLS have notched up in 2009.

Just Between Us: Our Private Diary is an exclusive peek inside their phenomenal world. Join Aston, Ortisé, Marvin and JB as they hang out with their famous friends, appear on Friday Night with Jonathan Ross, team up with Alexandra Burke on their triumphant return to X Factor, create mass hysteria by switching on the Christmas lights in Manchester and much much more.

Jam packed full of unseen photos shot especially for the book, plus behind-the-scenes gossip and never-before-seen video footage of the band, the awesome story of JLS's year is a must-have for any true fan.

JLS comprise of Aston Merrygold, 21, Marvin Humes, 24, Jonathan “JB” Gill, 22 and Oritsé Williams, 22. Formed in 2007 JLS hit the headlines as they became the first band to reach The X Factor finals. This is their first book.

Other Works by JLS

JLS: Our Story so Far