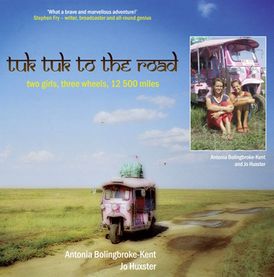 AT A SPECIAL LOW PRICE FOR A LIMITED TIME

If you've ever been to Bangkok you'll have most likely been catapulted through the streets in a tuk tuk, one of the city's ubiquitous three-wheeled taxis. With white knuckles and ringing ears you'll have stepped out at the end and vowed to take a regular taxi next time. But one summer Jo Huxster and Ants Bolingbroke-Kent decided to drive a tuk tuk that little bit further – to Brighton, a mere 12,561 miles away. Their mission: to raise £50 000 for the mental health charity Mind.

Tuk Tuk to the Road is the inspirational story of the ultimate road trip – the countries they traverse, the people that help them, the nail-biting border crossings, the extremely friendly policemen… Every detail of their record-breaking tukathon is chronicled in colourful and often hilarious detail.

Twelve countries, two continents, one earthquake and the odd snapped accelerator cable later, this is the entertaining, honest, and above all, remarkable story of two girls who proved that with a little bit of determination, anything is possible.

‘What a brave and marvellous adventure!’ Stephen Fry

'A wonderful idea… Mental illnesses are painful and often hidden diseases which afflict millions of people. Thank goodness that there are those who want to help and thereby transform the lives of so many suffering in silence and hiding.'
Melvyn Bragg, President of Mind

Antonia Bolingbroke-Kent is a television producer, writer and co-author of a travel book on Canada. Following the suicide of a close friend, Antonia is passionate about raising money for Mind and increasing awareness about mental health issues.

Jo Huxster is a medical student and lives in Brighton. A recovered self-harmer, Jo is an inspiration to everyone who has ever suffered from mental illness and thought 'Will I ever be normal again?' Jo loves ferrets and currently has ten furry friends.

Other Works by Jo Huxster