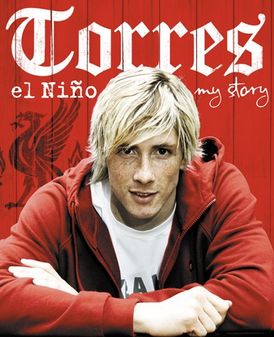 Fernando Torres is one of the hottest properties in world football. From local Madrid idol to Kop hero and European Championship winner, he talks here for the first time about the unique challenges faced in his two seasons in England, with candid snapshots of his early years in Spain and life in the North West on and off the field.

At the age of 25, Spain’s Fernando Torres has already established himself as one of the Liverpool greats and a proud wearer of the fabled No 9 shirt.

His first book, framed within 25 pivotal themes of his life, provides a captivating illustrated story of his career to date, alongside revealing insights into his formative years in Madrid, as a child football prodigy and lifelong fan of local club Atletico.

Nicknamed ‘El Nino’ (The Kid), Torres opens up about life on the streets besides Atletico’s Vicente Calderon stadium, signing for the club at aged 15 and appointed club captain by 19, becoming, as one local journalist put it, ‘one part folk hero, one part native son, one part messiah.’

When Liverpool broke their club transfer record to bring Torres to Anfield in July 2007, it proved the turning point in his career. Competing in the goldfish bowl of the English Premier League, settling into the North West and playing alongside Liverpool heroes like Steven Gerrard and Jamie Carragher, in the company of Spanish team-mates Pepe Reina, Xavi Alonso and Albert Rieira, and performing in front of the Kop who quickly adopted him as one of their own – Torres describes what it means to him to play on one of the greatest stages in world football, and compares and contrasts life in Spain with his new career in England.

Away from the football, Torres talks about life out of the spotlight with his family and close friends, and what inspires and motivates him.

Fernando Torrres was born in Madrid in March 1984. He played for his first football team, aged 5, as a goalkeeper and signed as a professional for Atletico Madrid aged 15, made his first-team debut two years later, and became club captain at 19. After 200 appearances for Atletico, he was signed for a club-record £20 million by Liverpool in July 2007, and in his debut season in the Premier League became the first Liverpool player in 12 years to score 20 goals. He made his debut for Spain in 2003, has amassed over 50 caps to date, and has played in two European Championships and one World Cup. He scored the winning goal for Spain in the 2008 European Championships Final. He has an older brother and sister, and has a current personal fortune estimated at more than £14 million.

Other Works by Fernando Torres