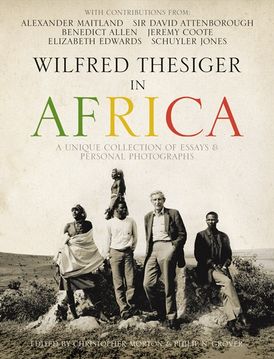 A unique collection of essays accompany Wilfred Thesiger’s own personal photographs of the Africa he experienced as one of the world’s most celebrated explorers.

While Wilfred Thesiger’s own classic writings (including ‘The Marsh Arabs’, ‘Arabian Sands’, ‘Desert’, Marsh and Mountain’, ‘The Life of My Choice’ and ‘My Kenya Days’) comprehensively cover his classic journeys amongst the Marsh Arabs in southern Iraq, or across the Empty Quarter in Arabia, they fail conspicuously to shed light on his character and motives, which have remained an enigma.

Maitland’s biography had Thesiger’s support before he died in 2003, and has been written with full access, granted to no one else, to the rich Thesiger archive – vivid, intimate family correspondence, and his own letters, diaries and notebooks which are far more confiding than his scrupulously edited published accounts. Maitland investigates in depth Thesiger’s parents and family influences; his wartime experiences and the ethos of conflict; his philosophy as a hunter and conservationist; his development as a writer and photographer; his close friendships with the Arabs and Africans amongst whom he lived; and his sexuality. In all, this major biography of a great and unusual man will take its place on the shelf of outstanding lives of the great explorers.

‘Meticulous research is illuminated by Maitland's evocations of Thesiger’s affinity with a world characterised by desert romance.’ Sunday Telegraph

‘This book is a worthy testament to an exceptional life – and as an authorised biography it is also the last cry of Thesiger himself, someone who evoked complete worlds of brutal majesty now denied the rest of us forever.’ Independent on Sunday

‘In his long and extraordinary life Wilfred Thesiger was compared to the greatest travellers of the Victorian age…Maitland captures that strange attractiveness, his undoubted love and understanding of a now-vanished world.’ Financial Times

‘What makes Maitland’s book so worthwhile are the letters which Thesiger wrote home to his devoted mother Kathleen.’ Spectator

‘This thorough biography will be fascinating to Thesiger aficionados.’ Mail on Sunday

‘Maitland has done justice to an extraordinary subject.’ Scotsman

Alexander Maitland was a close friend of Thesiger for forty years. He edited Thesiger’s anthology, ‘My Life and Travels’ (2002) and helped produce Thesiger’s ‘My Kenya Days’, ‘The Danakil Diary’, ‘Among the Mountains’ and ‘A Vanished World’. He is the author of biographies of Freya Stark and John Hanning Speke, and most recently of ‘Wilfred Thesiger: A Life in Pictures’.

Other Works by Alexander Maitland