Montegue Blister’s Strange Games: and other odd things to do with your time 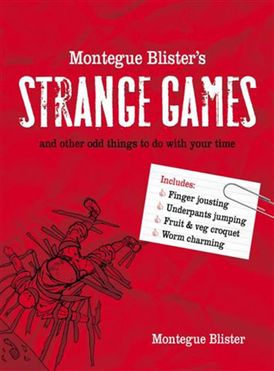 Montegue Blister’s Strange Games: and other odd things to do with your time

illustrated by Alan Down

Taken from the brilliant website http://strange-games.blogspot.com/, Montegue Blister's Strange Games is a pocket-sized compendium of the most hilarious, noisy, messy, and often vomit-inducing games ever written.

Finally, the official rules for all the games you played at school as a kid, such as Finger Jousting, Peanuts, Slapsies and Thumb Wrestling. But that's not all! Montegue Blister's Strange Games includes dangerous variations on old classics such as Extreme Rock Paper Scissors, Bloody Knuckles, Shin Kicking and Toe Wrestling, plus a whole host of new, weird and wonderful games like Face Ball, Crazy Stair Climbing, Watermelon Skiing and Mosquito Squashing.

Some games are violent, some are downright savage - and most involve a tiny bit of blood. But one thing's for sure - they're great fun! Montegue Blister's Strange Games is the perfect gift for Christmas and beyond.

Other Works by Montegue Blister

Other Works by Alan Down