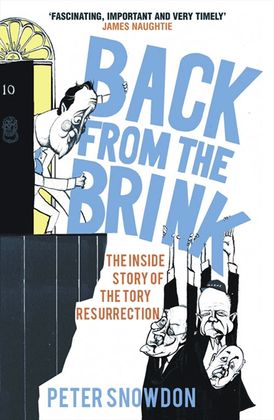 Lifting the lid on the most captivating story in British politics today, ‘Back from the Brink’ charts the Conservative Party's remarkable journey from the political wilderness to the threshold of power.

Based on unprecedented access to key figures in the Conservative party, including every leader from John Major to David Cameron, political journalist Peter Snowdon sheds new light on the dramatic decline and renaissance of the party that dominated 20th century British politics.

He reveals how the Conservatives were torn apart by in-fighting as they struggled to come to terms with their catastrophic electoral defeat in 1997 and the continuing trauma of Margaret Thatcher's sudden removal from office several years earlier. Under a succession of hapless leaders - William Hague, Iain Duncan Smith and Michael Howard - the party lost two further elections and at times effectively ceased to function as a political force across whole swathes of Britain. It took the emergence of a new generation of Conservatives, and David Cameron's election as leader in 2005, to set the party on the uneven road to electoral recovery.

Packed full of fresh insights into what really goes on behind closed doors at Westminster, Back from the Brink exposes the bitter rivalries and recriminations that have blighted the Conservatives in Opposition, and gets to the heart of Cameron's quest for power and ambitions for office.

Other Works by Peter Snowdon