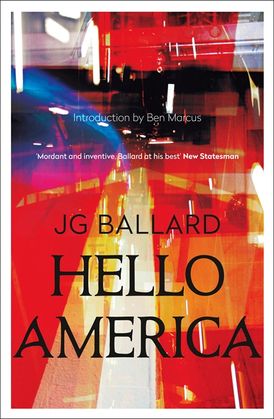 A terrifying vision of the future from one of the twentieth century’s most renowned writers – J. G. Ballard, author of ‘Empire of the Sun’ and ‘Crash’.

Following the energy crisis of the late twentieth-century America has been abandoned. Now, a century later, an expedition from Europe returns to the deserted continent. But America is unrecognisable – the Bering Strait has been dammed and the whole continent has become a desert, populated by isolated natives and the bizarre remnants of a disintegrated culture.

The expedition sets off from Manhattan on a cross-continent journey, through Holiday Inns and abandoned theme parks. They will uncover a shocking new power in the heart of Las Vegas in this unique vision of our world transformed.

This edition is part of a new commemorative series of Ballard’s works, featuring introductions from a number of his admirers (including Ned Beauman, Ali Smith, Neil Gaiman and Martin Amis) and brand-new cover designs.

J.G. Ballard was born in 1930 in Shanghai, where his father was a businessman. After internment in a civilian prison camp, he and his family returned to England in 1946. He published his first novel, The Drowned World, in 1961. His 1984 bestseller Empire of the Sun won the Guardian Fiction Prize and the James Tait Black Memorial Prize, and was shortlisted for the Booker Prize. It was later filmed by Steven Spielberg. His last novel Kingdom Come, was published in 2006; his autobiography Miracles of Life was published in 2008 to much acclaim. J.G. Ballard passed away in 2009.