The Thorn of Lion City: A Memoir 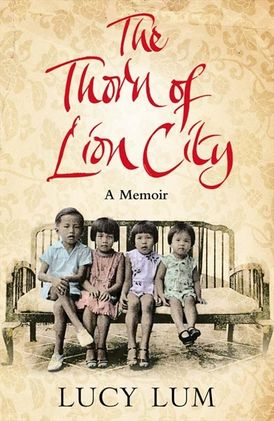 The Thorn of Lion City: A Memoir

An intense and emotive memoir of one girl’s difficult family upbringing in a Singaporean Chinese family during the Second World War.

Lucy Lum was the third of seven children, born in Singapore in 1933 into a Chinese immigrant family ruled with an iron hand by Popo, her fearsome and superstitious grandmother. Popo is a firm believer in the old ways, in stomach-churning herbalist remedies, in the dubious fortune-telling of mystics, and in mischievous little girls like Lucy knowing their place, and is forever keen to dispense her own wicked brand of justice, much to the despair of her adopted family.

Yet the suffering does not end at home. This is Singapore in the forties, a former British colony now living under the spectre of the invading Japanese – the hungry worms crawling down from the north as Lucy knows them – and fear floods the streets outside the family home. Lucy's father, a kind-hearted and talented linguist, finds himself being used by the occupiers as a translator, and brings back terrifying stories of his merciless employers, family friends blown apart inside their rickety shelters, dead bodies heaped on top of one another by the roadside, that he confides to his daughter under the heavy teak table in the dining room.

‘The Thorn of Lion City’ is a fascinating and honest account of wartime occupation and of a little girl's upbringing in a repressive Chinese family. At times harrowing, at others touching, it breaks the long silence of the Singaporean Chinese and speaks of hardship, family and the softly-spoken, redemptive relationship between a father and daughter.

Lucy Lum was born in Singapore in 1933 and lived through the Japanese occupation during the Second World War. In 1970 she emigrated to London, where she now lives with her family.

Other Works by Lucy Lum