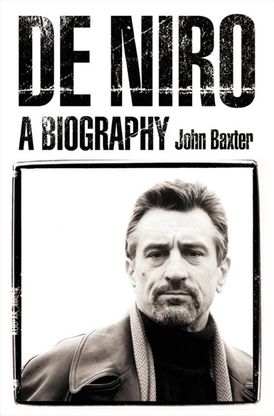 The life of Hollywood’s number one movie actor, the elusive Robert De Niro, who shuns the limelight and rarely gives interviews, written by the leading film critic and biographer of Spielberg, Kubrick, Woody Allen and George Lucas.

Robert De Niro is the pre-eminent Hollywood character performer of our time: film portraits like the young Don Vito Corleone in THE GODFATHER II, Jake La Motta in RAGING BULL and Travis Bickle in TAXI DRIVER are some of the most vivid ever put on celluloid. De Niro cannot be cast to type, prefers to work for old friends like Martin Scorsese, and (apart from FRANKENSTEIN) has never played anything but 20th-century roles.

John Baxter calls him ‘the archetypal empty bottle which only becomes visible when it’s filled by a role’: which makes him such a tempting subject for one of Hollywood’s finest historian/biographers.

As well as his film roles, Baxter examines De Niro’s often controversial private life, his collaborations with directors like Martin Scorsese and performers like Harvey Keitel and Meryl Streep, and his increasingly ambitious off-screen activities.

John Baxter is a film critic, novelist, biographer and broadcaster, whose books include The Hollywood Exiles, The Cinema of Josef von Sternberg, The Cinema of John Ford, and biographies of Ken Russell, Fellini, Buñuel, Steven Spielberg, Stanley Kubrick, Woody Allen and George Lucas. Born and brought up in Australia, he has worked in London, taught in the United States, and now lives in Paris.