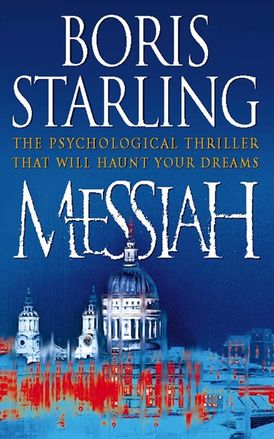 A stunning, shocking, wonderfully well written debut reminiscent of James Patterson and one that will catapault Boris Starling to the front rank of thriller writers.

London is in the grip of a heatwave: airless days, strange steamy nights and a killer stalking the streets. Wealthy men are being murdered to some mysterious pattern, with no clues left behind, only corpses with silver spoons in place of their tongues…

Set against this merciless butcher is DCI Red Metcalfe, an investigator with a celebrated ability to get under the skin and into the minds of the deranged killers he hunts. But as the city swelters and the body count rises, Red’s own tortured past begins to turn against him – and the city is safe for no one. Sometimes, it is said, it takes a killer to catch a killer…

The most compelling and suspenseful British thriller to come along in years, and Boris Starling is a startling and powerful talent to watch. Messiah is guaranteed to haunt your dreams…

Boris Starling is an award-winning novelist, screenwriter and journalist.

His books have reached the Sunday Times and New York Times bestseller lists. He is the author of the popular HAYNES EXPLAINS series.

His debut novel MESSIAH was made into a prime time BBC1 series which ran for five seasons, and he is currently writing the screenplay for an animated sci-fi reimagining of Charlie Chaplin’s THE KID.

Boris writes regularly for several national newspapers and was the writer-in-residence at Max Gate, Thomas Hardy's house. Before becoming a full-time writer, he worked for an international consultancy specialising in political risk assessment, confidential investigations and kidnap negotiation.

Boris lives in Dorset with his wife, children, dogs and a constantly fluctuating number of chickens and ducks.

Other Works by Boris Starling