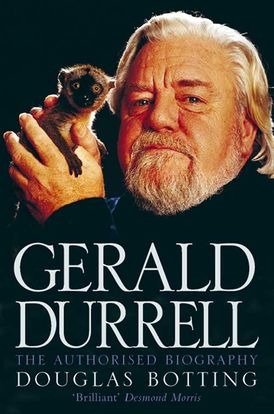 The authorised biography of the great naturalist and conservationist Gerald Durrell, who died aged seventy in January 1995 in Jersey, where he founded the zoo he’d dreamed of as a small boy and pioneered the captive breeding of animals for conservation.

Gerald Durrell was a world-famous naturalist and popular author who wrote, in all, some thirty-seven immensely readable yarns, including the bestselling ‘My Family and Other Animals’. His other books include ‘Birds, Beasts and Relatives’, ‘The Bafut Beagles’ and ‘A Zoo in My Luggage’.

Above all, he paved the way in print for the popular presentation of the natural world on television and presented twelve series himself – the early ones, of his own expeditions. Sir David Attenborough has said: ‘He was responsible for changing people’s attitudes to zoology and changing their agenda. He showed them small animals could be as interesting as apes and elephants…He was a pioneer with a marvellous sense of humour.’

His brother was the famous writer Lawrence Durrell.

Douglas Botting’s biography of GAVIN MAXWELL was hugely praised. His previous books reflect his interest in travel, exploration and wild places. He was an exploration film-maker for the BBC’s ‘World About Us’ and became a full-time writer with the publication of his highly praised biography of the German explorer-naturalist Alexander von Humboldt, Humboldt and the Cosmos.

Other Works by Douglas Botting