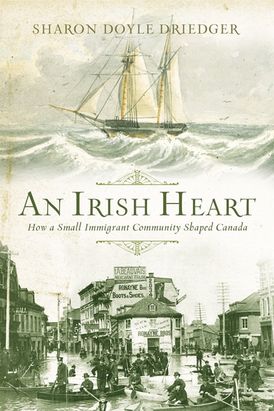 During the Great Famine of the 1840s, thousands of impoverished Irish immigrants, escaping from the potato crop failure, fled to Canada on what came to be known as “fever ships.” As the desperate arrivals landed at Quebec City or nearby Grosse Isle, families were often torn apart. Parents died of typhus and children were put up for adoption, while lucky survivors travelled on to other destinations. Many people made their way up the St. Lawrence to Montreal, where 6,000 more died in appalling conditions.

Despite these terrible beginnings, a thriving Irish settlement called Griffintown was born and endured in Montreal for over a century. The Irish became known for their skill as navvies, building our canals and bridges, working long hours in factories, raising large, close-knit families. This riveting story captures their strong faith, their dislike of authority, their love of drink, song and a good fight, and their loyalty.

Filled with personal recollections drawn from extensive author interviews, An Irish Heart recreates a community and a culture that has a place of distinction in our history. From D’Arcy McGee and Nellie McClung to the Montreal Shamrocks, Brian Mulroney and beyond, Irish Canadians have made their mark.

The Irish call it the Harbour of Tears. From time beyond memory, countless thousands have sailed away from their beloved Ireland from the Cove of Cork, a rare natural harbour tucked into the wild, jagged cliffs of the southwest coast. . . . Never did Cork Harbour see more weeping and wailing than in Black ’47. In that single sad year, more than 10,000 men, women and children left from that port, among the year’s unprecedented exodus of more than a quarter of a million Irish to North America.

—From An Irish Heart

Sharon Doyle Driedger, a former senior writer for Maclean’s magazine, was born in Griffintown to a third-generation Irish family. This book grew out of a Maclean’s cover article that had tremendous reader response. Doyle Driedger has won a National Magazine Award for her writing. She lives in Toronto with her family.

Other Works by Sharon Doyle Driedger