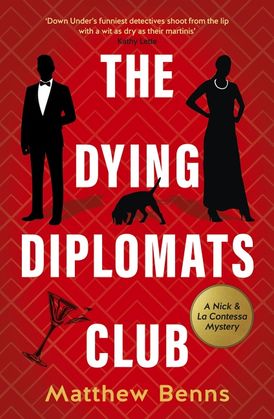 'Time for a martini, darling?'

But a dramatic revelation from the PM sets off more fireworks inside than outside ... and that's before the bodies start to pile up.

As suspicion falls on some of the most powerful people in the country, the race is on. Can Nick and La Contessa solve the case before anyone else joins the dying diplomats' club?

Bonus story included! Go back to where it all began with Nick and La Contessa's first adventure in the smash hit newspaper serial We're All In This Together.

Matthew Benns has spent his career as a journalist chasing and exposing some of the biggest conmen and women in the world. He has worked for newspapers in Fleet Street including The Sun, Today and Daily Mail and in Sydney for The Daily and Sunday Telegraphs and The Sun Herald.He is also the author of a number of books including bestsellers The Men Who Killed Qantas and Fixed, an expose of the seedy underbelly of the horse racing industry in Australia. His 2011 book, Dirty Money, was number one on the business books bestseller list and described by investigative journalist John Pilger as 'a terrific book - the first of its kind in Australia'. He is currently the Editor-at-Large at The Daily Telegraph.

Other Works by Matthew Benns